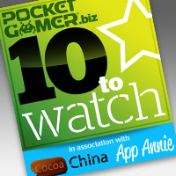 Pocket Gamer has put East Side Games on its list of “Top 10 Mobile Game Developers to Watch in 2013”.

Characterizing itself as “fiercely independent”, Vancouver developer East Side Games is best known for its Facebook game Pot Farm, and it’s now heavily into mobile too.

The games it makes are very different from the norm, however, as demonstrated by romance and treasure game Ruby Skies and the beautifully animated ‘gold barfing’ game Dragon Up. Should one take off like Pot Farm, East Side will certainly be piling up the treasure.