Vancouver Film School (VFS), in partnership with Blackbird Interactive, East Side Games, and Timbre Games Studio is pleased to present the 2022 Indigenous Scholarship in Video Games, including mentorship and a paid internship.

The scholarship fund, valued at over US$200,000, is open to applicants 18 years of age and older who identify as First Nations (status or non-status), Inuit, or Métis, and who are looking to enter the game industry as developers. The deadline to apply is June 8, and winners will be announced on National Indigenous Peoples Day, June 21. 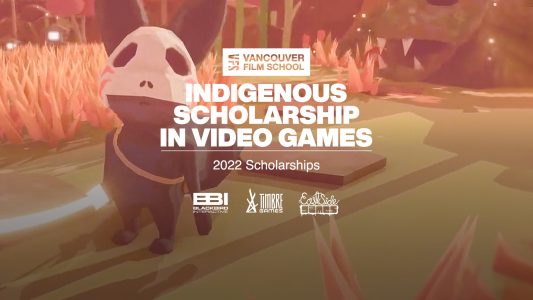 Three full-tuition scholarships for VFS’s Game Design program and one full-tuition scholarship for the 3D Animation & Visual Effects program will be awarded and may be applied to either the October 24, 2022, or January 3, 2023 intakes. Winners will be selected directly by top-tier AAA studios Blackbird Interactive, East Side Games, and Timbre Games, the latter of which will also select the winner who will enrol in the 3D Animation & Visual Effects program.

Additionally, all winners will receive private mentorship by design professionals from Blackbird Interactive, East Side Games or Timbre Games, as well as by their instructors at VFS. Upon graduation, these winners will also receive a paid four to six-month work contract at their respective studio.

Finally, each of the winners will be provided with a laptop for use during the program and to keep. The winner chosen by Blackbird Interactive will also receive a $5,000 housing stipend while studying at VFS.

“Blackbird Interactive (BBI) is honoured to be collaborating with local gaming studios and VFS on the Indigenous Scholarship in Video Games. We are working to create impactful opportunities that First Nations, Inuit, and Métis students can explore, fulfilling their creative technology aspirations in meaningful ways. An education from VFS helps open the door to careers in film, games, 3D animation, and VR/AR design, among other fields. We believe that actions speak louder than words and that young people are the future. There is a lot more that needs to be done, but this is a small and important step for just one of our many local industries.” -Rob Cunningham – CEO & Co-Founder, Blackbird Interactive

“Communities thrive on diversity. Whether we’re talking about games, entertainment, or film, we need to ensure we’re including voices and perspectives representative of the community around us. The Indigenous Scholarship in Video Games through Vancouver Film School can do just that. As a member of the Métis community, it is an honour to be able to support a program taking a step in the right direction towards a more inclusive creative landscape. While there’s much work to be done, this is a good start.” -Josh Nilson – Co-Founder, Studio Head and General Manager, East Side Games

“At Timbre Games, our mission is driven by the idea that ‘culture drives creative’. The opportunity to support and collaborate with VFS, Blackbird Interactive and East Side Games on the Indigenous Scholarship in Video Games is a small first step to removing systemic barriers in entering the game industry for the Métis, Inuit, and First Nations people. All of us at Timbre are thrilled to be a small part of creating space in the games industry for these communities. I believe these students will play a significant role in the world of interactive entertainment in the years to come and we are grateful to have the opportunity to support their careers along the way. There is more hard work to be done in this space and Timbre is committed to listening and learning as we embark on our own journey.” -Joe Nickolls – President and Co-Founder, Timbre Games

“It is a pleasure for VFS to be joining forces with three outstanding Vancouver studios to offer the 2022 Indigenous Scholarship in Video Games. This scholarship aims to foster more diversity and more inclusion in the game industry with the aim to have more Indigenous developers actively designing the next generation of games. At VFS, we are proud of the many Indigenous graduates from our programs who now have successful careers both in Vancouver and globally, and this scholarship is Vancouver Film School’s privilege and opportunity to play a role in emerging Indigenous developers building their creative careers.” -Christopher Mitchell – Head of Game Design and Programming for Games, Web & Mobile, VFS

Vancouver Film School is committed to fostering and growing Indigenous representation in the video game industry. Indigenous artists, performers, and storytellers are a foundational thread in the fabric of the Canadian narrative, continuing to grow stronger as key voices within our country’s multidimensional creative landscape.

For more information about the 2022 Indigenous Scholarship in Video Games, or to apply, visit the scholarship page on the VFS website.

In 1987, Vancouver Film School introduced the world’s first true immersion film program. Today, VFS is Canada’s premier post-secondary entertainment arts institution, offering an immersive curriculum in film, animation, design, and beyond. VFS is known for providing high-quality education in accelerated time frames and offers 15 industry-integrated programs in which students graduate in 12 months as an in-demand, industry-ready creative professional. VFS alumni are consistently credited on the highest grossing films, television shows, and games worldwide, in a global industry set to generate US$2.1 trillion in revenue in 2022.