A Letter From a Founder on Equality

After a very fiery vocal discussion about our health benefits forms in the office this morning, we (the entire studio) received an email from HR stating:

Due to Jason Bailey’s passionate rant this morn about gender boxes on the benefit forms and forcing employees to state their sexual orientation by identifying their partner’s gender AND supporting gender identity and gender expression, ESG is going to make a stand to force change within the insurance company, specifically raise sh*t for Equitable Life.

Below is a copy/pasted letter from East Side Games Founder Jason Bailey, about the lack of empathy across the board by our health benefits company.

Today I am embarrassed as an employer. We signed up for a new benefits program to hopefully make our employees life better and fuller. As part of that process we asked everyone to complete and submit new forms to us. That formed asked them to identify their gender as well as their partners gender and submit it to us, thereby outing their sexuality. This is none of my business, I apologize. Because it is 2016.

East Side Games works hard to be a very liberal and inclusive workplace and many people here are ‘out’ on both sexuality and gender identity issues. Unfortunately many employers are not as liberal and having to reveal such information could create a very disruptive and upsetting result. Sadly, even in 2016, even in Canada, revealing your sexuality to your employer could be devastating in many workplaces. This stand is for those people. 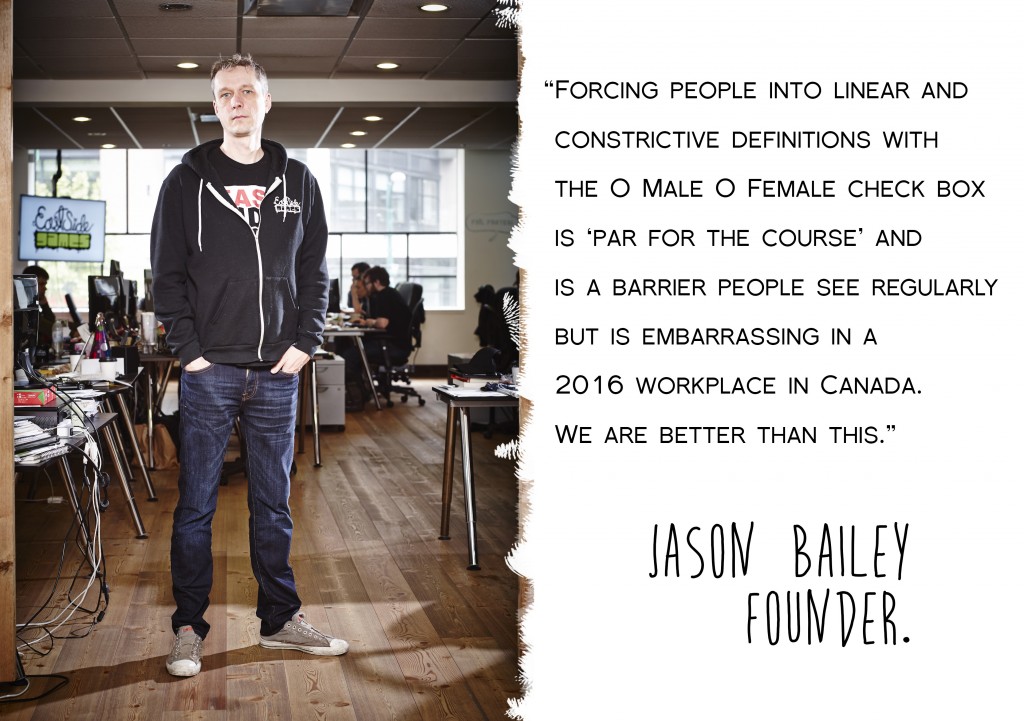 We will allow any employees who wish, to uncheck any and all of those boxes before we send the forms in. If Equitable Life of Canada or Ace Life feel they need this information for a valid reason, they will have to address that directly and privately or lose customers.

There may well be valid reasons an insurer may want to ask gender questions, ‘validity’ of that is another issue, but there are much more sensitive ways of gathering this information IF it is truly needed. At the very least, there are more creative ways for insurance companies to fluff their pricing.

As a ‘1 Percenter’ who was lucky enough to be born english speaking, first world, reasonable looking, able bodied, straightish, reasonably intelligent, white, AND male it is my obligation to stand up and check my privilege. I did nothing to earn the fact that most every door of opportunity I have ever approached has opened widely for me. The best thing I can do with such privilege and voice is to stand up and say “What the fuck Equitable Life?!? How does forcing my employees to reveal their sexuality and gender to me ‘Benefit’ them?

I personally apologize to all of East Side Games employees.

On behalf of ESGers, and all those affected by prejudice worldwide, I thank you from the bottom of my heart for making THIS workplace a safe one, a loving one, and most of all an EQUAL ONE.